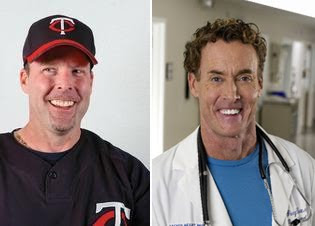 Cleveland--As of January 1, 2010 the Indians roster combined for a mere 41 games played from its catching position. With Kelly Shoppach moving on to Tampa Bay, so too did the team's most tenured catcher for the second time in four months.

The heir apparent to the everyday backstopping duties has been prospect Carlos Santana since Victor Martinez was dealt to the Red Sox in August. Scouts, and fans alike, note that Santana's skill set is not ready and rushing him to the Big Leagues could jeopardize what little assets the Tribe has remaining. The obvious decision is to keep Santana in AAA and patiently wait.

The Indians look to bridge the gap with an inexperienced duo of 2009 rookies. Wyatt Toregas and Lou Marson were late-season call ups in '09 to replace Martinez and relieve a struggling Shoppach. The two combined for just 26 hits; but to be fair, their average age is only 25 and neither has played more than two months with the Indians. They are serviceable back-ups, but like Santana, need time to mature. It would be unfair for the Indians to expect anything more than a 8 or 9 hitter in the lineup and a middle-of-the-road manager of a youthful rotation. At the end of the day, neither would be an Opening Day starter for any other team in Major League Baseball. Fans who demand that the catcher production void be filled by one person are unrealistic. It will be years before a perennial All-Star is a constant behind the plate in Cleveland.

Enter Mike Redmond and a three-man platoon. What little money the Tribe was willing to spend this off-season brought the 38 year-old veteran from the AL Central rival Twins. While he may have a physical likeness to actor John C. McGinley, Cleveland fans hope his leadership more closely mirrors an on-screen character played by Tom Berenger. Jake Taylor, the Major League personality with the big heart and the bad knees behind the plate, moves into a mentor role in the 1994 sequel. Taylor feels he still has much to contribute on the field, but it is the work done with young catcher Rube Baker (Eric Bruskotter) that proves to be the most beneficial to the team. Baker has all the skills and no brains, while Taylor's skills are diminished with age and his intelligence around a MLB clubhouse emerges as his greatest quality. In cinematic terms they are a classical duo, surprisingly helping each other learn more about themselves. Do not be surprised to see life imitate art on the field in 2010; Marson and Redmond could take the script to the real world. Redmond has convincingly passed the audition for the part--ask AL MVP Joe Mauer who he credits with helping him become a better all-around catcher.

Add Sandy Alomar, Jr. as a new coach, and Lou Marson will be mentored by two highly credible teachers of the craft. The hitting will undoubtedly come with repetition and time, but Redmond and Alomar can affect Marson's ability to manage a young pitching staff immediately. When Redmond signed with Cleveland he talked about working with A.J. Burnett, Dontrelle Willis, and Brad Penny when they first came up with the Marlins organization. That arsenal of young arms looked like veterans in the hands of Redmond. He hopes to experience similar joys with the likes of Justin Masterson, Aaron Laffey and David Huff. Redmond told Indians blogger, Anthony Castrovince, "It's nice to have the opportunity, as a veteran player, to really influence their career." All of this spells astonishingly early maturation by the pitchers as well as Marson. The weak link of the Tribe lineup might have to look elsewhere.

As for whether or not he is actually the brother of actor John C. McGinley, Redmond made no mention.

Leave Comments on my Facebook page or Email Feedback to w.ross.clites@gmail.com

Popular posts from this blog

For MLS Expansion, 27 Is The Magic Number Garber & Co. Continues To Disregard

November 07, 2018
What a wild two months it has been for the next (and final) wave of expansion in Major League Soccer. The recent surge of headlines has been a welcome sighting; the league office had gone radio silent on the topic for far too long. If you can believe it, the awarding of  Nashville SC  as a future franchise is already coming up on its one-year anniversary.  The most contemporary piece on the subject — team number 24 going to  FC Cincinnati  — turns six months old next week. It sure feels like just yesterday, but time flies when there is nothing else verifiable to report. Until early September, that Cincinnati announcement sat on the "Recent News" tab of MLS expansion sites collecting dust. Even the most speculative bloggers were in wait-and-see mode. Forecasting any further seemed futile until a deadline for the next batch of proposals was presented.    The only other expansion story of 2018 came out in January, when  David Beckham's South Florida endless soccer quest
Read more

October 18, 2020
Do you know the typical setting of a rookie reliever making his 1,000th Major League pitch? That answer is an emphatic "No" perhaps followed by a good-natured "No one does." Even in today's pitch count-centric world, that's not a threshold any analyst is rattling off during a telecast. But, by diving heavy into the research, I found out that we may have witnessed the most iconic instance in baseball history on Saturday night. For your [modern] classic one-inning bullpen guys, with an average of 17 pitches per, you're looking at their 58th career appearance. With the focus on service time and "starting the free agency clock" it's become really tough to squeeze that many outings into a singular rookie campaign.  On the rare occasion that a rookie spends an entire season with a Major League club  — like a Jeurys Familia did with the 2014 New York Mets  — 1,000 occurs during appearance number 61 in the dog days of summer (August 20). He went o
Read more

December 18, 2018
We all have that one friend that butchers a particular word within a quote/phrase/song lyric/idiom, to the point our blood boils whenever it resurfaces. And I'm not even talking about grammatical mistakes like  there ,  their , and  they're  or the difference between affect  and  effect . Those go largely undetected in speech; only ever showing up as egregious typos in a text or email. No, I'm talking more about painful linguistic attacks on the ear drums.  These instances can be as innocuous as assigning a plural verb to a singular subject. I recently saw a commercial that aims to  dissuade Illinois residents from driving buzzed or drunk . Nothing to really joke about there. And I'll admit that the music, voice-over, and simulated car crash are powerful enough to command attention. If it happens to follow an ad that is frequently mocked in your household, this ominous 30 seconds certainly re-centers the tone in the room. Or at least it should. So what is wrong with me
Read more

September 30, 2018
Pop quiz: How many wins did the Tampa Bay Rays end up with this season? Seriously, don't cheat. Attempt a guess, or at the very least, come up with a range. 75-80, right?   A few games over .500, maybe?    In major league seasons such as this, where all ten playoff teams were settled prior to the final Sunday, the average fan's stock response goes something like: "It was a busy Week 4 in the NFL. I know there's a tiebreaker or two on Monday, but I don't have a clue how the other teams ended up."  Well, would you trust me enough to not fact check it on your own if I said the Rays got all the way to 90-72?  And I'll do you one better. Take a look at all the promising teams that didn't make it to the 90-win plateau.  A sexy sleeper pick by many, this was supposed to finally be the year where the Seattle Mariners'  17-year playoff drought  would end  (89) .  Sparked by a managerial change in July, it sure looked like the St. Louis Cardinals coul
Read more

May 10, 2017
For the life of me, I cannot come up with anything comparable for what Marc-Andre Fleury is doing in these playoffs. Resurrections of this magnitude rarely appear anywhere outside of the New Testament. Yet, here he is; back from the dead, leading (yes, leading) Pittsburgh to the Eastern Conference Final.  The liability has been converted to an asset, and share-holders that stuck with him through his penny stock days (i.e. me) are loving it.    There is a theme of this piece centered on rebounds. On the micro level, Fleury was able to respond from a 5-2 beat down in Monday's Game 6. In a hostile Verizon Center, he stopped all 29 Washington shots in Wednesday's series finale -- stealing the 2-0 victory . He was nothing short of spectacular in Round 2's only shutout. Fleury's name was apropos for the the barrage sustained. Even 5-on-5, the ice tilted in the home team's favor from the onset. To the nervous spectator, the game's first eight minutes read like a conti
Read more

The Cloverleaf Chronicles I: Sun Angles

April 11, 2020
This is a companion piece to 4Most Sport Group's video series The Cloverleaf Chronicles . Read this in conjunction with Episode #1 on Sun Angles.  If you are stumbling upon this blog before watching the video, treat it as the prologue to what you will see. I f you are arriving here as directed by our little educational segment, c onsider this the rich backstory for the "star" of that show. Okay, that'll be the only terrible dad joke, I promise.  In all seriousness, this information is not entirely necessary to extract the thesis out of The Cloverleaf Chronicles' first installment. However, it is the perfect amount of "nerding out" for those, like me, that want to learn everything about everything. It's a medium dive, with plenty of Sun-related things there wasn't time to tuck into the video. Call it the director's cut. What we aim to do is drop a few anecdotes about our compelling heavenly body. We'll also sprinkle in some cultural hi
Read more

How The Super Bowl Has Ruined Your High School Football Program

February 04, 2019
Back to work the day after the Super Bowl is always a tough one. The football season has come to an end and all that's left behind is a bitter chill in the air. There's nothing overly exciting on the sports docket until Major League Baseball's new Thursday Opening Day and the first two days of March Madness — all of which should be national holidays.  Until then, hockey and basketball teams will either be jockeying for playoff positioning or riding out the end of a disappointing season. That means an awful lot of tanking for Jack Hughes and Zion Williamson (personally I prefer R.J. Barrett), salary cap dumping, or attempting to land Artemi Panarin and Anthony Davis via trade. In each case, February has become more about off-field/court noise rather than the games themselves.  Face it, most of the month is a real nothing burger for sports coverage. If you want to hear people talk on screen, your time would be better spent catching up on Netflix stand-up specials. The flu
Read more