New Face of the Cleveland Indians: A Proposal 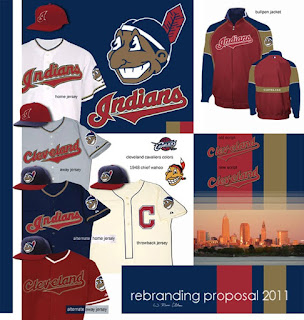 I am writing all the members of the Cleveland Indians front office as a lifelong fan, but more importantly, a design student with a proposal. This off-season there will undoubtedly be changes made to the club and I strongly feel an image overhaul could compliment the youth movement for the 2010 season; one that will usher in a new coaching staff and showcase the new core of Sizemore, Choo, and Cabrera. This is their time to ditch the same logo that decades of losing sported 25 years ago.

Let me first start by stating my background is in architecture, with a Bachelor’s Degree from Kent State University. I played baseball at Kent for three seasons and am now 23, in my second year of grad school. I am pursuing a dual-degree MBA and Master's of Architecture with graduation in May. While taking a Marketing Strategy course I wrote a thesis on the brand identity of professional sports franchises. I looked at the case study of the Tampa Bay Devil Rays "exorcising" their demons by dropping "Devil", but specifically focused on the 2002 Anaheim Angels. They switched back to the traditional red color and "A" logo. It ushered in not only a new wardrobe but an entire mindset transition. The Mike Scioscia era is now synonymous with winning in red, and the navy pinstripe days of Jim Edmonds were forced to be forgotten. Unfortunately, this is the case currently in Cleveland. The Victor Martinez, Cliff Lee era is gone. Help the fans move forward with a change of uniforms. Otherwise, we will always ask ourselves why those players still are not in them.

A spike in winning percentage can obviously come from offseason acquisitions, but you cannot discount the power of the other moves (i.e. hosting an All-Star Game, changing an image, or moving to a new ballpark like New Busch Stadium and Jacobs Field). We all know the big-budget free agents will never be signed by the Tribe and Progressive Field is not going anywhere for 50 more years, so why not try something else?

I live and die with the Cleveland Indians. I attended 11 games last season in a year that we were all but mathematically eliminated by May. My friends and I waited through the 3 hour delay in the freezing rain in this year’s home opener, which ousted the snow we sat in two years ago. My fanhood can never be questioned.

The attached proposal is something I want to be taken seriously. My motivation is taking a page from the city of Pittsburgh, of all places. They have a great system in place by uniting their sports franchises by a single color palette. This has also been done more recently—and lesser known—in Seattle with their NFL and MLS teams. The Seattle Sounders have tried to capture football fans into futbol fans by sharing the Seahawk green. For Cleveland, this could bring casual Cavs fans on the Tribe band wagon and vice versa. They can push each other to get that first championship in decades. Merchandising can be done at either the Q or Progressive and promotions could showcase the other team.

As you will notice the jersey colors shift so that red has now become Cavs “wine” with the gold accents. My second alteration is simple. It is the reason there are still unhappy Native Americans throughout the world still flooding blogs and probably also your mailbag every day. It is the reason I have to maneuver around protestors at the Home Opener every season. I love Chief Wahoo, do not get me wrong. I was devastated when he was shrunk on the caps after the 2002 season. At the same time, I agree that he needs an overhaul. Taking a page from the Angels, going back to the glory days of the past helps. The ’48 Wahoo is way over-the-top with stereotypical features, but at least the skin color is not red and he won a World Championship. The Cavs secondary color makes a nice color for a new Wahoo, updated to still have the smile and eyes fans are accustomed to, but looking more distinguished and realistic. We have to remember the Indians name should honor the culture, not mock it.

I fully understand that this would spell a giant sunk cost of changing merchandise. It would also make many fans disappointed. It would date 10 shirts in my closet, my Indians jersey, two of my hats, and my bullpen jacket. I validate it by saying that the stock for throwbacks is huge. Look at lids.com sometime. They are selling the Coop Collection of hats from the mid-to-late 90s and kids my age are gobbling up hats like the D-Backs in white like crazy. The current Wahoo would never be forgotten, and will show up in the stands regardless.

Leave Comments on my Facebook page or Email Feedback to w.ross.clites@gmail.com

Popular posts from this blog

October 18, 2020
Do you know the typical setting of a rookie reliever making his 1,000th Major League pitch? That answer is an emphatic "No" perhaps followed by a good-natured "No one does." Even in today's pitch count-centric world, that's not a threshold any analyst is rattling off during a telecast. But, by diving heavy into the research, I found out that we may have witnessed the most iconic instance in baseball history on Saturday night. For your [modern] classic one-inning bullpen guys, with an average of 17 pitches per, you're looking at their 58th career appearance. With the focus on service time and "starting the free agency clock" it's become really tough to squeeze that many outings into a singular rookie campaign.  On the rare occasion that a rookie spends an entire season with a Major League club  — like a Jeurys Familia did with the 2014 New York Mets  — 1,000 occurs during appearance number 61 in the dog days of summer (August 20). He went o
Read more

For MLS Expansion, 27 Is The Magic Number Garber & Co. Continues To Disregard

November 07, 2018
What a wild two months it has been for the next (and final) wave of expansion in Major League Soccer. The recent surge of headlines has been a welcome sighting; the league office had gone radio silent on the topic for far too long. If you can believe it, the awarding of  Nashville SC  as a future franchise is already coming up on its one-year anniversary.  The most contemporary piece on the subject — team number 24 going to  FC Cincinnati  — turns six months old next week. It sure feels like just yesterday, but time flies when there is nothing else verifiable to report. Until early September, that Cincinnati announcement sat on the "Recent News" tab of MLS expansion sites collecting dust. Even the most speculative bloggers were in wait-and-see mode. Forecasting any further seemed futile until a deadline for the next batch of proposals was presented.    The only other expansion story of 2018 came out in January, when  David Beckham's South Florida endless soccer quest
Read more

September 30, 2018
Pop quiz: How many wins did the Tampa Bay Rays end up with this season? Seriously, don't cheat. Attempt a guess, or at the very least, come up with a range. 75-80, right?   A few games over .500, maybe?    In major league seasons such as this, where all ten playoff teams were settled prior to the final Sunday, the average fan's stock response goes something like: "It was a busy Week 4 in the NFL. I know there's a tiebreaker or two on Monday, but I don't have a clue how the other teams ended up."  Well, would you trust me enough to not fact check it on your own if I said the Rays got all the way to 90-72?  And I'll do you one better. Take a look at all the promising teams that didn't make it to the 90-win plateau.  A sexy sleeper pick by many, this was supposed to finally be the year where the Seattle Mariners'  17-year playoff drought  would end  (89) .  Sparked by a managerial change in July, it sure looked like the St. Louis Cardinals coul
Read more

May 10, 2017
For the life of me, I cannot come up with anything comparable for what Marc-Andre Fleury is doing in these playoffs. Resurrections of this magnitude rarely appear anywhere outside of the New Testament. Yet, here he is; back from the dead, leading (yes, leading) Pittsburgh to the Eastern Conference Final.  The liability has been converted to an asset, and share-holders that stuck with him through his penny stock days (i.e. me) are loving it.    There is a theme of this piece centered on rebounds. On the micro level, Fleury was able to respond from a 5-2 beat down in Monday's Game 6. In a hostile Verizon Center, he stopped all 29 Washington shots in Wednesday's series finale -- stealing the 2-0 victory . He was nothing short of spectacular in Round 2's only shutout. Fleury's name was apropos for the the barrage sustained. Even 5-on-5, the ice tilted in the home team's favor from the onset. To the nervous spectator, the game's first eight minutes read like a conti
Read more

The Cloverleaf Chronicles I: Sun Angles

April 11, 2020
This is a companion piece to 4Most Sport Group's video series The Cloverleaf Chronicles . Read this in conjunction with Episode #1 on Sun Angles.  If you are stumbling upon this blog before watching the video, treat it as the prologue to what you will see. I f you are arriving here as directed by our little educational segment, c onsider this the rich backstory for the "star" of that show. Okay, that'll be the only terrible dad joke, I promise.  In all seriousness, this information is not entirely necessary to extract the thesis out of The Cloverleaf Chronicles' first installment. However, it is the perfect amount of "nerding out" for those, like me, that want to learn everything about everything. It's a medium dive, with plenty of Sun-related things there wasn't time to tuck into the video. Call it the director's cut. What we aim to do is drop a few anecdotes about our compelling heavenly body. We'll also sprinkle in some cultural hi
Read more

How The Super Bowl Has Ruined Your High School Football Program

February 04, 2019
Back to work the day after the Super Bowl is always a tough one. The football season has come to an end and all that's left behind is a bitter chill in the air. There's nothing overly exciting on the sports docket until Major League Baseball's new Thursday Opening Day and the first two days of March Madness — all of which should be national holidays.  Until then, hockey and basketball teams will either be jockeying for playoff positioning or riding out the end of a disappointing season. That means an awful lot of tanking for Jack Hughes and Zion Williamson (personally I prefer R.J. Barrett), salary cap dumping, or attempting to land Artemi Panarin and Anthony Davis via trade. In each case, February has become more about off-field/court noise rather than the games themselves.  Face it, most of the month is a real nothing burger for sports coverage. If you want to hear people talk on screen, your time would be better spent catching up on Netflix stand-up specials. The flu
Read more